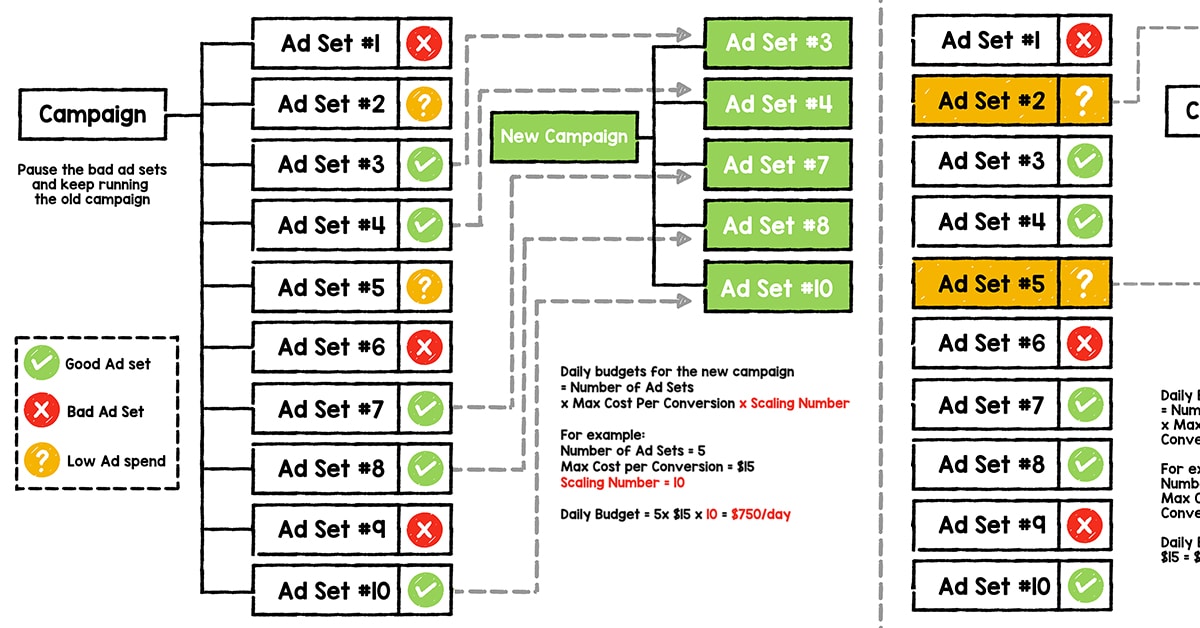 I have spent over $77k+ testing CBO over the past few months and I have some answers to these questions for you.

This post is from my own experience only. Other people might have a different way to work with CBO or get different results. There are countless ways to test CBO, so you have to try it yourself.

Previously, we could set our daily budget independently at the ad-set level (Ad Set Budget Optimization, or ABO). The old campaign structure without campaign budget optimization will be like this.

When we want to scale, if we see an ad set is performing well, we can increase the daily budget independently or duplicate that ad set.

The total budget for the good-performing ad set will be increased without affecting other ad sets inside the same campaign.

But Campaign Budget Optimization is totally different. You cannot set a daily budget at the ad-set level anymore.

Campaign Budget Optimization basically means you have to set a daily budget at the campaign level.

The Facebook algorithm will allocate the budget to ad sets differently, based on the data it has in real time.

This is how Facebook explains how Campaign Budget Optimization works:

“We optimize your campaign budget in real time on an opportunity-by-opportunity basis. Our goal is to get you the most results possible, and for the cost of those results to align with your bid strategy.”

The new campaign structure with Campaign Budget Optimization will look like this:

Again, with CBO, you cannot set a daily budget at the ad-set level anymore.

If you want to scale up, you have to increase the daily budget at the campaign level or duplicate the whole campaign.

I’ll explain more about this later in the scaling phase section.

So why do we all need to learn about CBO right now?

First, Facebook announced that CBO will be the fixed default for all ad accounts starting this September. But they just postponed it to February next year.

We won’t be able to set a budget at the ad-set level as of February next year. So you have a few more months to learn how to work with CBO.

In my first few days of testing CBO, I didn’t like it much because it didn’t give me the results I wanted. It seemed good on the first day, but the costs kept increasing after that.

But I kept testing it for a while with many campaigns, and I finally found that I liked it – a lot. It actually saves me tons of time, because I can scale my campaigns much faster and more efficiently than before.

Before learning how to work with CBO, let me explain the campaign bid strategy first.

There are four types of Campaign Bid Strategy.

The first one, Lowest Cost, is the default setting for the bid strategy. Facebook will control the bidding price for you. It will try to find the most results for the budget you set. You don’t have to do anything.

For the Cost Cap, Bid Cap, and Target Cost, you can control the cost yourself. You can define how much you’re willing to pay for one conversion, and Facebook will try to find the audience that can give you a conversion at that amount.

In my opinion, I think these two bid strategies are similar to the manual-bid strategy of the past. Facebook will try to get results at a cost we define.

For the Lowest Cost strategy, Facebook will try to spend all of your budget to get the most results, no matter the cost per conversion.

These three cost-control strategies have some differences. You can see the differences in the comparison from Facebook below.

For the Cost Cap, Facebook’s system will try to get you the best results at a cost below the cost cap you define.

So you will see the cost per conversion increase after your campaign runs for a while.

After I tried CBO for a while, I found that I preferred to use two bid strategies – Lowest Cost and Cost Cap – for my campaigns, but in different situations.

Many people (including me) usually defined the same daily budget for all ad sets. All ad sets would spend equally, so we could easily determine which ones performed well and which ones didn’t.

When I start testing a new campaign with CBO, I normally create 10 ad sets with different 10 interests inside a campaign.

The daily budget for the campaign will be calculated from the number of ad sets in the campaign and the maximum cost per conversion I want.

The max cost per conversion is an ad cost that will allow me to profit from a sale.

Otherwise, it will be difficult to make a profit.

I calculate my daily budget by multiplying the number of ad sets by the max cost per conversion.

For the bid strategy, it’s better to start with the lowest cost, as I’m not sure whether Facebook can make sales at the cost per conversion I want.

If I use Cost Cap as the bid strategy at the start and the cost cap I define is too low, I might not get any traffic.

So I let Facebook decide the cost for me. If the cost is too high after running a campaign for a while, it might be because my product, ad or target audience is not strong enough.

I need to figure out which part is the problem – the product, the ad or the target audience. Adjust them one at a time.

But normally, I will find a new product to test, which is much easier.

But in Campaign Budget Optimization, we can’t increase the daily budget or duplicate winning ad sets anymore, because this can be done only at the campaign level.

But I find scaling is easier to do than before.

What I normally do in CBO is duplicate the whole campaign and increase the daily budget.

But when I duplicate the campaign, I’ll copy only the winning ad sets to the new campaign. The bad-performing ad sets will be paused.

The daily budget will be higher, and the way we calculate it is a bit different.

It will be calculated from the number of ad sets multiplied by the max cost per conversion and the scaling number.

The scaling number is the extra amount you want to spend on the ads in order to scale.

I usually use 10x, because I already know that these are the top-performing ad sets from the old campaign.

I want to scale fast, so I add 10x to the budget to make more conversions.

Referring to the example above, if I want to scale my Necklace campaign and find only 5 ad sets that perform well, my daily budget will be:

To do this, you have to make sure that the audience is big enough. Otherwise, the same people will see your ad multiple times, and this makes your ad performance worse.

If you’re unsure about the performance of your ad sets, you can multiply by a lower number such as 3x or 5x.

Control the cost with the Cost Cap bid strategy

Now, if you want to use a higher scaling number – let’s say, higher than 10x – you may need to use “Cost Cap” as your bid strategy.

With Cost Cap, you can define the cost per conversion you want, and Facebook will try to get results at your desired cost.

If the cost is too low, Facebook might not able to get a result, and your budget won’t be spent. So you need to adjust the cost to let Facebook allocate your budget.

No- or Low-Budget Spend

Apart from the good and bad ad sets, there will be some ad sets for which Facebook didn’t allocate a budget to spend.

This may be because some ad sets perform really well and Facebook allocates most of the budget to these ad sets. So some ad sets won’t spend.

For this kind of ad set, I’ll create a new campaign and let them run again there.

Also, I will find other target audiences and create new ad sets to make that campaign have 10 ad sets in total.

This new campaign will be tested as a new campaign, so the daily budget will be calculated the same way as in the testing phase.

Although Facebook’s system uses machine learning to get results at the lowest cost, it’s always better to preselect an appropriate audience by ourselves.

If the audience is too broad, Facebook will spend more budget and time to get results, and this will create losses for your campaign.

It’s better to guide Facebook’s system to know which audiences are likely to purchase your product.

For example, if you’re selling a product for women, exclude men from your ad set.

If you’re selling gaming products, try to find an audience of gamers. Find some Facebook interests that relate to gaming.

Or if you’ve run your campaign for a while and find that the cost per conversion from Instagram is high and you rarely make a profit from it, exclude Instagram.

Don’t get too broad at the start. Before letting Facebook do the heavy lifting, filter your target audience to get better results.

After you have made some sales, make sure to create a Lookalike Audience from your group of buyers or from the people who visited your website.

I normally create multiple ad sets, differentiated by the gender and age of the Lookalike Audience.

All ad sets will intersect with a group of winning Facebook interests (optional).

Sometimes the Lookalike Audience is too broad, so I narrow it down with other interests to help Facebook easily find a more accurate audience.

With this age and gender strategy, the overlap percentage is very low. I let Facebook decide which demographics should get a higher ad spend.

You can scale much more aggressively using this scaling method.

Campaign Budget Optimization is a new feature that forces us to set a daily budget at the campaign level and let Facebook’s system allocate the budget between ad sets inside the campaign.

It’ll be the default setting for all ad accounts next year, so it’s smart to learn how to work with it as soon as you can.

After spending over $77k+ on CBO, I found that it’s actually a useful feature that helps me scale my campaigns easily and much more aggressively.

Remember, there are countless ways to test CBO. My CBO testing and scaling strategies are just one of many out there. You should try everything you can think of and make improvements along the way.

Again, CBO won’t work if your product, ad copy, or target audience aren’t good enough. You need to keep testing all combinations and find the ones that work.

If you have any questions about CBO or Facebook Ads, feel free to put ask them in the comments section below. I’ll try to answer every question. 🙂

P.S. CBO is actually just a small piece of the whole picture. There are many other details you need to learn and pay attention to, such as the ad copy, the selling system, the retargeting system, etc.

P.P.S. You can read Facebook Marketing Strategy For eCommerce to learn how to set everything up and run a successful Facebook campaign.

Want to stay in the loop?